A recent Twitter post from my former colleague Anne Klammt made me aware of a recent relaunch of “Zeitschriftendatenbank” (ZDB), the portal for periodical holdings in German (and Austrian) libraries.

Part of the German National Library (Deutsche Nationalbibliothek, DNB), the website looks great and provides a lot of data-driven functionality, such as maps and timelines of holdings. The display language of the website itself, though not the bibliographic data, can be toggled between German and English. This is a welcome nod to international users and will certainly increase the visibility of this important portal. However, it must be noted that unfortunately the dataset of bibliographic data is not as accessible as the interface. Languages written in scripts other than Latin are provided in a variety of inconsistent transcriptions into Latin script for mostly historical technical reasons. This is not the fault of ZDB per se but it will prevent communities from the Global South from finding and accessing their own cultural heritage, which for various reasons are held by institutions in the Global North. This is especially relevant for Arabic material, as I will elaborate in the section on transliterations below. 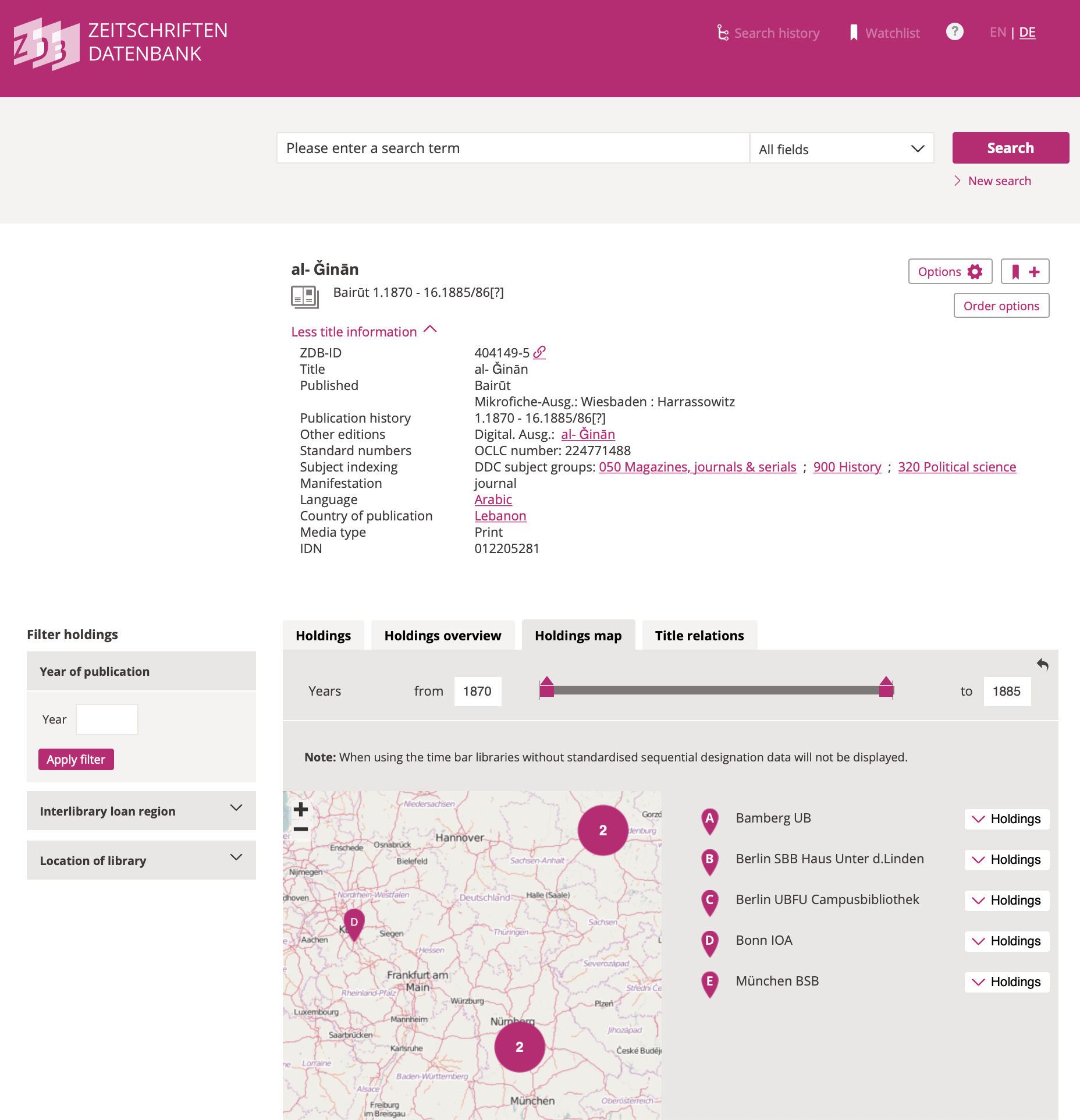 On the upside, however, ZDB supports historical political entities, such as the Ottoman Empire, for facetted browsing, which I have not yet seen in other library catalogues.

Crucially, ZDB also provides open access to machine-actionable data through the website and a number of application programming interfaces (APIs). I had recently worked on mapping the rather flat MARC XML (MAchine-Readable Cataloguing, an ubiquitous standard for recording and exchanging bibliographic data maintained by the Library of Congress) to more structured TEI (Text Encoding Initiative) and was curious how much holding data for Arabic periodicals I could gather for our Project Jarāʾid data set through the ZDB APIs. As it turned out, a lot. This allowed me to integrate fairly comprehensive information on German holding institutions! I have finally moved away from the rudimentary data model upon which the Jarāʾid website is still based. The new data model is built around <tei:biblStruct> and allows for much better handling of holdings and events in a publications life cycle. The data set has consequently moved to the repository of authority files for my project OpenArabicPE. Eventually, the data will find its way to Project Jarāʾid.

Querying ZDB through SRU (Search/Retrieve via URL and another standard maintained by the Library of Congress) is rather simple and has the advantage of being accessible without any scripting through the web browser. I was looking for holding data of periodicals published before 1930—information that is unlikely to change often or frequently—and I do not foresee a need to regularly update data pulled from ZDB. In case this will be necessary in the future, we can simply diff the old and new results and only integrate the resulting changes based on the ZDB identifiers..

The SRU interface is well documented and one can easily query ZDB for Arabic periodicals published between 1780 and 1929 using the following query: https://services.dnb.de/sru/zdb?version=1.1&operation=searchRetrieve&query=spr%3Dara%20and%20eje%3e1780%20and%20eje%3c1930%20sortby%20eje/sort.ascending&recordSchema=MARC21-xml&maximumRecords=100. The options encoded in this URL cover language (spr), date of publication (eje), sorting, and output formats. There are a couple of observations to be made:

The SRU query returns MARC XML with all the relevant bibliographic information for reconciliation. However, a major piece of information, the one I was actually looking for, was missing: Holding information is not included in the data returned via SRU. Some brief Twitter communication with Reinhold Heuvelmann later, it turned out that GND had devised a new MARC field (924) for holding information and that this field was available only through the individual MARC XML files for ZDB IDs, whose URLs follow the pattern http://ld.zdb-services.de/data/{ZDB ID}.plus-1.mrcx. As the ZDB ID is part of the data available through SRU, I scripted a query for retreaving these individual MARC XML files for each item based on the list of ZDB IDs returned via SRU. While this data is sufficient, I wanted to dereference the ISIL (International Standard Identifier for Libraries and Related Organisations (ISO 15511:2019)) codes for the holding institutions in order to get full names, addresses, and geographic location data (which is, inter alia, used for the maps on the ZDB website). Thankfully ZDB maintains a linked open data service that provides RDF data for this purpose using the URL: http://ld.zdb-services.de/data/organisations/{ISIL}.rdf for holding institutions and for getting their geographic locations .

The final XSLT for transforming the MARC XML returned via SRU into TEI <biblStruct> nodes including holding information can be found in this GitHub repository.

Looking at the cataloguing data a number of issues became immediately apparent:

On the upside, ZDB provides OCLC identifiers, which can be used to reconcile records with other sources.

There is a long standing tradition to transliterate non-Latin scripts to Latin based on the language and using sets of rules/best practices involving an extended Latin alphabet with diacritics. In theory, the rules should be obvious and correctly and consistently applied. There should also be a technological stack that allows for the correct application of the rules.

This state of affairs necessitated some adaptations of our code for re-transliterating the IJMES transliteration of Arabic back into Arabic script as well as a lot of data cleaning. The resulting TEI, however, is worth it and can easily be integrated into our authority files:

Integrating the ZDB data has significantly expanded the holding information in our data set, which is demonstrated by the following map.

It is important to note that these results are only possible due to the combination of crowd-sourced authority data with cataloging data from libraries. Not only was the latter not readily available when we started working on Project Jarāʾid ten years ago. The catalogue data is very difficult to use without our data cleaning efforts and the reconciliation with bibliographic authority data in the original script. The ZDB website apparently provides some logic in the background that allows to search for Latinized strings without diacritics by removing all such diacritics. Obviously and while welcome, this does not solve the larger issue of deficient data and not being able to search for titles in their original script. In addition, this logic is not implemented for all fields (one cannot find the string “at-Tā’ifa” as copied from the publisher of https://ld.zdb-services.de/resource/1280317-0 through the site’s search algorithm) and one still has to remember that the base letters of the transliteration should follow the German DMG system.

Finally, the Arabic definite article “ال” (al), which is prefixed to the noun, has been split with a space at the beginning of periodical titles. “At-taqrir” will, therefore, not return a record for “التقرير باعمال المجمع العلمي العربي”.

The map shows the significance of the library holdings at the American University of Beirut (AUB). We have to keep in mind, though, that holding data is difficult to get by. The ZDB data includes Worldcat IDs (<idno type="OCLC">), which should allow for querying Worldcat APIs. Unfortunately, Worldcat is famously protecting its data from all those unable (or unwilling) to pay and just removed its “experimental” LOD service. Beyond the Arabic Union Catalogue, which is not sharing data through APIs, I am not aware of any other transregional or international catalogue. This means that we will have to contact and query national catalogues where they are available and library or project catalogues for all other regions. One of the latter is HathiTrust, which provides a data dump for non-members with information on individual digitised copies as CSV.